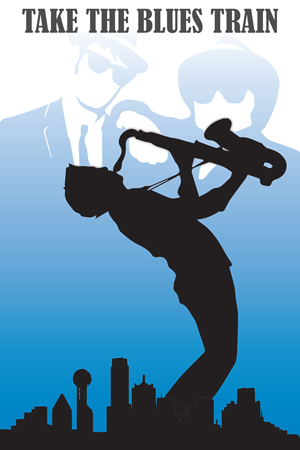 Music Director Eugene Migliaro Corporon and the Lone Star Wind Orchestra finish its season in the world of jazz featuring legendary saxophonist “Blue” Lou Marini of the famed Blues Brothers. On Sunday, March 29th, 7:30 PM, the LSWO will “Take the Blues Train” to the Meyerson Symphony Center performing works like Bernstein’s “Three Dance Episodes from “On the Town,” Adam Gorb’s “Awayday” and W.C. Handy’s “St. Louis Blues March.” Lou Marini showcases some of his own jazz compositions including a Blues Brothers medley.

Often referred to as an “unsung jazz hero,” platinum recording artist, Lou Marini, Jr. is the seasoned soul and adept multi-instrumentalist, arranger, composer, educator, and producer credited with inspiring the origins of a fan-following cult across multiple genres of music.

Making a name for himself as a sideman in various high profile groups, any top New York jazz musician will tell you he’s “one of the absolute best jazz musicians.” The New York based Marini is famed for his chameleon-like adaptability to imagine and perform inventive ideas in jazz, rock, blues and classical music. Describing Lou’s performances, the New York Times said, “(he’s) the focal point of the group…(who) gives the band most of its colors and shadings, and provides it with a strongly melodic lead voice.”

Lou Marini, Jr. is best known as a member of several distinguished bands: Woody Herman Orchestra, Doc Severinson, Blood, Sweat and Tears, The Band, Levon Helm & the RCO All-Stars, Dr. John, Frank Zappa, Saturday Night Live (SNL) Band, The Blues Brothers, Maureen McGovern, Lew Soloff Quintet, Blue Beck with Joe Beck, Eric Clapton, Red House, and the Magic City Jazz Orchestra. He has toured four times each with James Taylor’s Band of Legends and the John Tropea Band. A true blue lover of big bands, Lou has had the honor of performing with some of his childhood idols such as Thad Jones-Mel Lewis and the Buddy Rich Band, the latter with whom he also arranged.

It is Marini’s seven year association as an original SNL band member that led to his role as “Blue Lou” in John Belushi and Dan Akroyd’s cult classic movie, “The Blues Brothers.” To this day, the remarkable popularity of the Blues Brothers Band is kept alive. Lou and the other band members tour worldwide, giving live concerts to packed houses and hundreds of thousands screaming fans. No stranger to film, Lou Marini enjoys a formidable roster of success in this arena, too. His character as a band member and the saxophone soloist, who performs with his sax on the counter of a diner as Aretha Franklin sings “Think” in “The Blues Brothers” movie, remains throughout the sequel “Blue Brothers 2000.” Dubbed ‘Blue Lou’ by Dan Akroyd, he is also well-recognized for his saxophone solos at the open and close of SNL episodes, and as the golden pharaoh who plays a solo instrumental hit for comedian Steve Martin’s “King Tut” sketch on a 1978 episode.

About a decade prior to SNL, Marini’s sound was beginning to form at the University of North Texas (UNT). A member of the famed One O’Clock Lab Band, Lou flushed out his musical influences in fresh, exciting ways to create a sound that set him apart from his peers.

For a complete bio, visit: http://www.blueloumarini.com/bio.html

Written and compiled by Dominic Talanca

St. Louis Blues is W.C. Handy’s most famous work. The composer offers the following notes on the piece, “When St. Louis Blues was written, the tango was in vogue. I tricked the dancers by arranging a tango introduction, breaking abruptly into a low-down blues. My eyes swept the floor anxiously, then suddenly I saw lightning strike. The dancers seemed electrified. Something within them came suddenly to life. An instinct that wanted so much to live, to fling its arms to spread joy, took them by the heels.”

Steve Danyew offers the following about Magnolia Star, “In Magnolia Star, I explore various ways to use the pitches of the blues scale in harmonies, melodies, and timbres, creating a diverse set of ideas that will go beyond sounds that we typically associate with the blues scale. I didn’t want to create a “blues” piece, but rather a piece in my own musical voice that uses and pays homage to the blues scale. Nearly all of the pitches used in Magnolia Star fit into the concert C blues scale. Another influence was trains and the American railroad. The railroad not only provides some intriguing sonic ideas, with driving rhythms and train-like sonorities, but it was also an integral part of the growth of jazz and blues in America. In the late nineteenth century, the Illinois Central Railroad constructed rail lines that stretched from New Orleans and the “Delta South” all the way north to Chicago. Many southern musicians traveled north via the railroad, bringing “delta blues” and other idioms to northern parts of the country. The railroad was also the inspiration for countless blues songs by a wide variety of artists. Simply put, the railroad was crucial to the dissemination of jazz and blues in the early 20th century. Magnolia Star was an Illinois Central train that ran from New Orleans to Chicago with the famous Panama Limited in the mid-twentieth century.”

Three Dance Episodes from “On the Town” (1945)
Leonard Bernstein

Three Dance Episodes from “On the Town” was a full musical production emerging from the popular ballet Fancy Free. The work was premiered on December 28, 1945, and was so popular that MGM produced a feature-length movie starring Gene Kelly, Frank Sinatra, and Jules Munshin. Similar in plot to Fancy Free, three sailors in wartime (WWII) New York begin their 24-hour shore leave, eager to explore. The group has a number of adventures before their leave ends and they must return to their ship to head off to war.

Awayday was commissioned by the Royal Northern College of Music, Timothy Reynish, conductor. The composer offers the following notes, “In this six-minute curtain raiser, my inspiration has come from the great days of the American Musical Comedy. I have tried to express in a brief sonata form movement the exhilaration of ‘getting away from it all’ for a few short hours on a festive Bank Holiday. Musically the piece is an homage to the great days of the Broadway musical with its irresistible brashness and irrepressible high spirits. If you can envisage George Gershwin, Leonard Bernstein, Igor Stravinsky and James Bond travelling together at a hundred miles per hour in an open-top sports car, I think you’ll get the idea.”