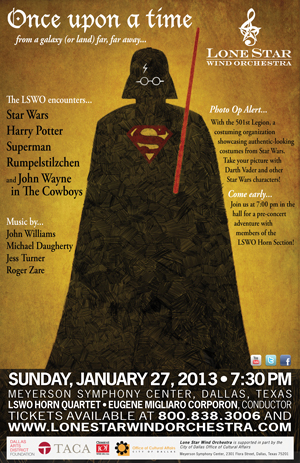 Written and compiled by Seth Wollam

Lift-Off!, a quick and energetic piece, was written when NASA was returning the Space Shuttle to flight in 2005 and is a celebration of human space exploration. The work has highly pointed rhythmic sections that give way to richly harmonized melodic sections, with an almost constant rush of sixteenth notes throughout the entire piece. Lift-Off! was commissioned by Andrew Lane and the Sarasota Orchestra Symphony Association. The wind version by the composer was premiered by H. Robert Reynolds and the USC Thornton Wind Ensemble on October 21, 2007.

Rumpelstilzchen is composed in three continuous movements, each depicting a different part of the folk tale. The first movement, “Spinning Straw into Gold,” paints a portrait of Rumpelstilzchen clattering away at his spinning wheel. You can hear the wooden clicking and rattling of the spinning wheel, Rumpelstilzchen laughing to himself, as well as ominous undertones of his plan to steal the poor maiden’s firstborn son. After gradually working himself up into a frenzy, Rumpelstilzchen manages to compose himself enough to complete his task before vanishing into thin air. The second movement, “Night (The Maiden’s Lament),” is a picture of the maiden’s grief upon realizing that she must give up her firstborn son to Rumpelstilzchen in exchange for his spinning services. A long, plaintive melodic line is passed among various solo instruments, gradually culminating in a mournful chorale as the grief-stricken maiden sings her sorrow into the night. The third movement, “Rumpelstilzchen’s Furiant (Moto Perpetuo),” portrays Rumpelstilzchen’s dance of fury after his plot is foiled when the maiden successfully guesses his name. This final movement is a technical tour de force for the entire ensemble as it paints the picture of Rumpelstilzchen dancing and whirling faster and faster until he flies out of the maiden’s house on a cooking ladle, never to be seen again.

Red Cape Tango is the fifth movement of Daugherty’s Metropolis Symphony inspired by the Superman comic strip of the 1950’s and 60’s. This movement was composed after Superman’s fight to the death with Doomsday. The principal melody, first heard in the bassoon, is derived from the medieval Latin death chant Dies irae. This dance of death is conceived as a tango, presented at times like a concertino comprising string quintet, brass trio, bassoon, chimes, and castanets. The tango rhythm, introduced by the castanets and heard later in the finger cymbals, undergoes a gradual timbral transformation, concluding dramatically with crash cymbals, brake drum, and timpani. The orchestra alternates between legato and staccato sections to suggest a musical bullfight.

Taken from the 1972 motion picture “The Cowboys” starring John Wayne and Roscoe Lee Browne, the music complements the story of a 60 year old Montana cattleman who enlists (and ultimately mentors) ten schoolboys as cowboys after the regular ranch hands have left with Gold Rush fever. Through music, we are transported to the Old West and experience the joys and hardships of cowboy life. The 400-mile cattle drive provides the boys with a different and harsher schooling as they learn the rigors of the job and have to deal with rustlers. The music conveys the high spirit of wild horses and their taming. Jollity around the campfire is contrasted against the loneliness of the open range. The plains have a beauty, though, which is reflected in the song of a lark. The hard work of the cattle drive, including the fording of the wide, muddy river and dealing with many fears and threats, succeeds in maturing the boys into men. This suite is a typical example of John Williams’ capacity to enrich a film story with an almost narrative musical score. The premiere of this overture for concert band took place July 12, 2003 as part of the 205th anniversary concert of the United States Marine Band.

“Harry Potter and the Sorcerer’s Stone” is the first film in the Harry Potter series based on the novels by J.K. Rowling. It is the tale of Harry Potter, an ordinary 11-year-old boy serving as a sort of slave for his aunt and uncle who learns that he is actually a wizard and has been invited to attend the Hogwarts School for Witchcraft and Wizardry. “Hogwarts Forever” for horn quartet is an exact extraction from the film’s soundtrack composed by John Williams.

Music from the original epic trilogy “Star Wars” would not only win John Williams both an Academy and a Grammy Award, but it would also propel into the cultural consciousness a universal music, uniting fans everywhere and inspiring them alike. A prosperous professional relationship with director, Stephen Spielberg, would eventually lead Williams to George Lucas, creator and director of “Star Wars.” The score he created was selected in 2005 by the American Film Institute as the greatest American movie score of all time. Like Bernard Herrmann before him, Williams employs the Wagnerian concept of leitmotiv: each character is given his or her own thematic music, a technique that allows the listener to recognize film’s characters and predict their interactions. This arrangement was conceived by Donald Hunsberger.