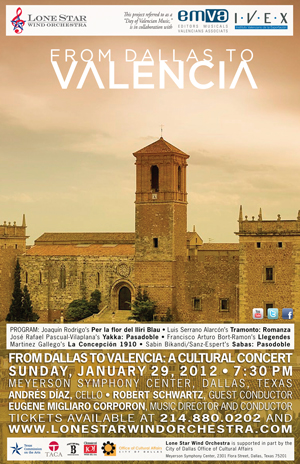 Written and compiled by David Robinson and Robert Schwartz

Yakka is a pasodoble for band commissioned by the “Asociación de Amigos de la Música” from Yecla for their participation at the 2007 International Certamen of Valencia. Yakka is a classical pasodoble, combining more modern colors and harmonies. The alto saxophone solo in the first theme is an homage to the conductor of the band, Ángel Hernández Azorín, a saxophonist.

Per la flor del lliri blau (For the Flower of the Blue Lily) is one of Rodrigo’s most significant works. Composed for substantial orchestral forces, this symphonic poem is based on a medieval Valencian legend: the three sons of a dying king go on a quest for the flower of the blue lily, whose magic powers will save their father. Musically, the poem is constructed around two principal motifs, one lyrical, the other epic in nature, one of the earliest examples of this kind of noble, courtly music to appear in the composer’s production. The work was first performed in Valencia on 26 July 1934 by the Orquesta Sinfónica de Valencia under the baton of José Manuel Izquierdo.

Tramanto: Romanza for Cello and Winds was composed as an homage to famous local painter Joseph Morea by the Cultural Association of Chiva la Tertulis. The piece, therefore, is based on one of Morea’s paintings: one that evokes a melancholy evening in Italy. This piece was originally written for cello and piano. Five years after its composition, the composer prepared this edition for cello with winds and percussion.

Llegendes is a symphonic poem for band. The composer notes about the work: “The story of this work is no different to that of any tale or legend: characters confront each other within the setting of a distant and paradaisical place. Dawn. The verdant valley is calm. A young man comes along a path, the hero who moves happily, dreaming: looking for fame and love. The morning advances. The splendor of the midday hovers over the valley; but the sun soon starts to decline. When the sun sets, the monster awakes. The young man has profaned its domains: the confrontation is inevitable. The battle between the hero and the monster begins. The furious combat is finished by the young man with eight blows from his sword. The monster, beaten, howls in agony. Final dance. The young hero celebrates victory with a party, where he meets a charming girl who he falls in love with. She in turn, falls in love with him, making his dream become reality: he finds fame and love.” Llegendes was selected in 2000 as a “test piece” in the Valencia International Music Bands Contest. The work was dedicated to Antonio Daniel Huguet, a close friend of the composer.

Sabas is a pasodoble premiered by the Municipal Band of Bilbao in December 2003. The piece contains two characteristics worthy of note: an introduction in the style of Chueca and references to bullfighting (dedicated D. José Luis Sabas, creator of the “BilbaoMusika” agency). Sabas was completed with musical assistance from Rafael Sanz-Espert, conductor of the Municipal Band of Bilbao.

La Concepción 1910 was commissioned by the Instituto Valenciano de la Música for a band contest held in the Cheste municipality of the Valencian Community. The piece concerns a farmhouse built in 1910 in the San Antonio village of Requena in Valencia, hometown of the composer. The house was built in the Art Nouveau style common to the time, which has been preserved through several renovations of the house. The structure and attached wine yards and winery are considered symbolic of the village and its people and together serve as the inspiration for this composition.