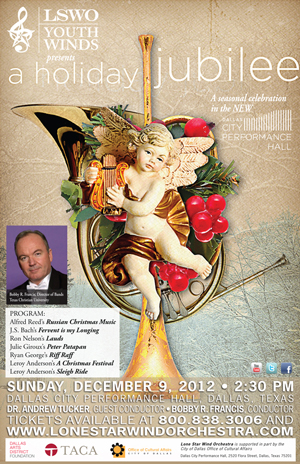 Written and compiled by Dr. Andrew and Kendal Tucker

Lauds is described by the composer as “… an exuberant, colorful work intended to express feelings of praise and glorification.” Lauds is one of the seven canonical hours that were selected by St. Benedict as the times the monks would observe the daily offices. Three (terce, sext, and none) were the times of the changing of the Roman guards and four (matins, lauds, vespers, and compline) were tied to nature. Lauds, subtitled Praise High Day, honors the sunrise; it is filled with the glory and excitement of a new day. The work received its premiere by the U.S. Air Force Band on January 24, 1992.

The melody used in Fervent is My Longing, a chorale prelude, is of unknown ancient origin, but is known to have been used at least as early as the sixteenth century by Hans Leo Hassler, who arranged it in choral settings. The best known examples which survive today are found in the music of J.S. Bach, who included this melody in various chorales and in the St. Matthew Passion to the text “O Haupt voll Blut und Wunden” (O “Fervent is My Longing”). Composed around 1710, this version is the source for this sensitive setting for band.

Riff Raff was born out of a recently renewed interest in post-war jazz and big-band. The works of composers and arrangers like Kenton, Riddle, Graettinger, Ellington, and even the jazz-inspired sounds in some of Bernstein’s symphonic music conjure up images (in my mind anyway) of the “urban rebel” found within mid-century American pop culture. This idea of the brooding lone figure who forges through life on their own terms can be found in some of the fictional film characters played by James Dean and Marlon Brando or in the hard-boiled detectives and heroes within pulp novels and film noir. “What I find interesting about these character’s is the double-persona that they usually possess. On one hand they exude an über-cool toughness and an “I don’t care what the world thinks” bravado. Yet internally there is often a conflicted and troubled soul in need of redemption.”

Russian Christmas Music uses the ancient Russian Christmas Carol, “Carol of the Little Russian Children”, together with the composer’s original material and some motivic elements derived from the liturgical music of the Eastern Orthodox Church. The piece is a musical impression of Old Russia during the jubilant Christmas season. Although cast in the form of a single, continuous movement, four distinct sections can be recognized, which the composer originally sub-titled: Children’s Carol, Antiphonal Chant, Village Song, and the closing Cathedral Chorus.

A combination of Tchaikovsky’s “Arabian Dance” from The Nutcracker Suite and the traditional “Patapan,” Peter Patapan starts fairly tamely and ends in a festive Russian dance style. “Patapan” (or “Pat-a-pan”) is a French Christmas carol composed by Bernard de La Monnoye and was first published in 1720. Revolving around the birth of Jesus Christ, the carol’s lyrics are from the perspective of shepherds playing simple flutes and drums. The composer writes, “An interesting fact is that while writing this arrangement I had no music in front of me and had never seen the lyrics. I only had the tune in my head and knew I wanted to use it. I scored the opening with a single drum and recorder. Only while putting together the program notes for the piece did I see the actual lyrics – quite a coincidence.”

A Christmas Festival was written in 1950 and is still one of Anderson’s most popular works. Old favorites include “Joy to the World”, “Deck the Halls”, “God Rest Ye Merry Gentlemen”, “Good King Wenceslas”, “Hark! The Herald Angels Sing”, “Silent Night”, “Jingle Bells”, and “Adeste Fidelis.”

Sleigh Ride is a popular light orchestral piece composed by Leroy Anderson. The composer had the original idea for the piece during a heat wave in July 1946 and finished the work in February 1948. Lyrics, about a person who would like to ride in a sleigh on a winter’s day with another person, were written by Mitchell Parish in 1950. This popular piece is often performed on holiday programs, even though the lyrics never mention any holiday-related activities. Still, since the Boston Pops, conducted by Arthur Fielder first recorded the piece in 1949, it has become a holiday concert staple.