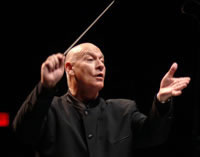 Having recorded over 600 works, including many premieres and commissions, his groups have released 100 recordings on the Toshiba/EMI, Klavier, Mark, CAFUA, Donemus, Soundmark, GIA, Albany, Naxos, and Centaur labels. These recordings, two of which have appeared on the Grammy nomination ballot, are aired regularly on radio broadcasts throughout Asia, Europe, and the Americas. Mr. Corporon maintains an active guest-conducting schedule and is in demand as a conductor and teacher throughout the world. He is Past President of the College Band Directors National Association and a member of the World Association for Symphonic Bands and Ensembles International Board. He has been honored by the American Bandmasters Association and by Phi Beta Mu with invitations to membership. Mr. Corporon, a frequent guest conductor at the Showa University of Music in Kawasaki City, Japan, has also served as a visiting conductor at the Interlochen World Center for Arts Education and the Aspen Music Festival and School.

He is co-host with Barry Green on The Inner Game of Music video, which focuses on overcoming mental obstacles and achieving one’s full potential as a performer. He also appears with James Jordan on the DVD, The Anatomy of Conducting. He is co-author of the book Teaching Music Through Performance in Band that is published in seven volumes by GIA Publications. This series includes thirteen sets of Resource Recordings by the North Texas Wind Symphony. The Teaching Music Project emphasizes the importance of comprehensive conceptual learning in the music-making process as well as the value of performing music of artistic significance.

Professor Corporon is a recipient of the International Grainger Society Distinctive Contribution Medallion as well as the Phi Beta Mu International Band Conductor of the Year Award. He has also received the Phi Mu Alpha Sinfonia National Citation for advancing the cause of music in America, the University of North Texas Student Government Association Honor Professor Award for teaching excellence, student rapport, and scholarly publications, the American School Band Directors Association A. A. Harding Award for making significant and lasting contributions to the school band movement, and the California State University, Long Beach, College of Fine Arts and Department of Music Distinguished Alumni Awards. He is grateful to many people for their guidance and inspiration in his life. Among them are Charles Yates, Robert Reynolds, Benton Minor, Don Wilcox, Larry Maxey, Jack Hopkins, Frederick Fennell, Barry Green, James Jordan, and Carolyn Corporon.